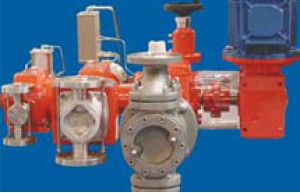 The company’s main activity during its early years was centered around an engineering workshop and its annexed cast iron foundry and aimed at satisfying the increasing demands of the rapidly expanding Lombardy industry at the start of the century. During the following years, the company added the construction of machines to its production.

The first patent for an hollow disc rotary pump was registered in 1918. The principle patented at the time is being used in a series of pumps still in production.

The 1950's saw the design and production of the first plunger dosing pump. The range of dosing pumps has since been expanded with the introduction of a number of diaphragm dosing pumps during the 70's. In the same 1970’s, OMG expanded its activities to include the design and construction of package dosing systems, manufactured according to customer’s specifications and the main governing standards for Oil & Gas, chemical and petrochemical markets.

During the 1980's, OMG initiated the introduction of a formalised quality system, with the first complete quality system being adopted in 1992. In the spring of 1996, OMG quality system was certified as conforming to ISO 9001.

Unlike other pump manufacturers, OMG has chosen to retain all design and construction activities in its property maintaining a higher level of quality control and greater manufacturing flexibility. This enables OMG to develop customized tailor made applications meeting all specific dosing requirements.